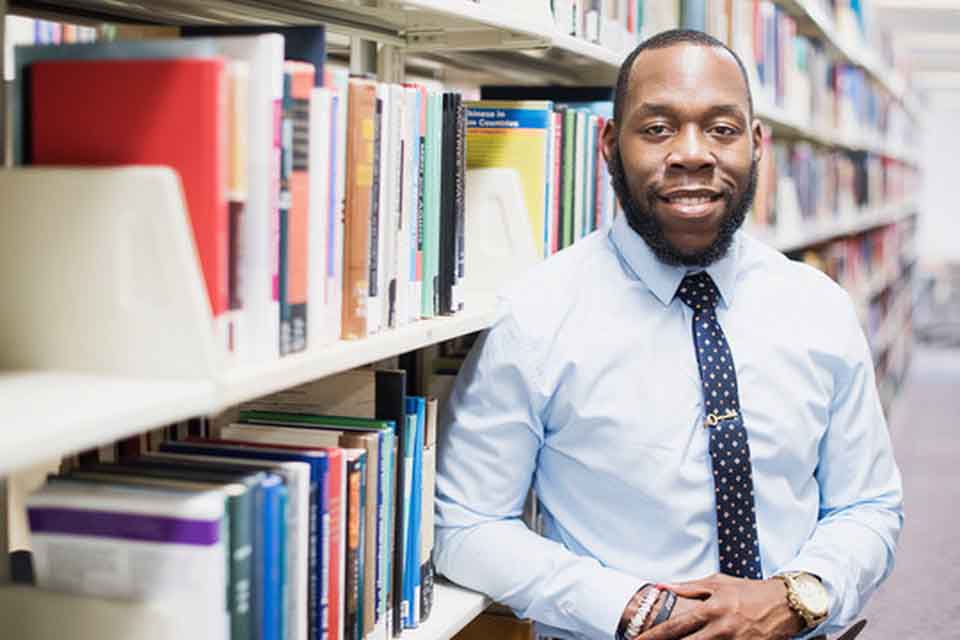 Corey Carroll’s path to American University’s School of Education began in a congressman’s office on Capitol Hill, where he struggled to find the words to answer one of the most important questions he’d ever been asked. Carroll was serving as an intern with the Congressional Black Caucus Foundation and working for Rep. Alcee Hastings, a Democrat from Florida’s 20th District. Carroll had earned his undergraduate degree in political science and pre-law and had intended to go on to law school, but on the Hill, he fell quickly and deeply in love with policy. As Carroll dived deeper into policy briefings and sessions, he only became more certain: this is what he wanted to do.

When the internship began to draw to a close, no part of Carroll wanted to return to his native Tulsa, Oklahoma. He wanted to stay in DC, the seat of his newfound passion, and help craft and pass policy. When he expressed this desire to Rep. Hastings, the Congressman sat Carroll down and asked him the question that would help clarify his next steps: “Who, and what, do you want to advocate for?” Rep. Hastings encouraged Carroll to pinpoint a specific area in which he believed he could make a difference.

Carroll had never asked himself that question, but he found that an answer was waiting: he wanted to bring real equity to America’s education system. With a rush, he realized that he had been cultivating his passion for education for years: he’d joined AmeriCorps as an undergrad at Grambling State University, he’d worked in the office of admissions and recruitment, and he’d served as a Student Government Association Class President.

Rep. Hastings told him that was an excellent answer. Now, Carroll needed to find his niche in education, stick with it, and hone it.

Carroll thought it over and decided that rather than move straight into the high-level realm of education policy he so loved, he’d first work to understand the education system—and its successes and challenges—from the ground up. He would become a middle school teacher.

“Why not start at the base?” he recalls thinking. “I wanted to understand what it takes to be in education from the policy side and from the classroom side. I knew that would make me more effective in becoming an education advocate.”

Indeed, the challenges of helming a middle school classroom made themselves known to Carroll right away. Typical eighth-grader disruptions were the least of it. Carroll saw for himself how strapped for resources his school was: computers sat broken, holes in the ceiling were ignored, and SMART Boards never seemed to actually work. The after-school programs needed because many parents couldn’t pick up their children from school until 7 or 8 p.m. were nearly nonexistent in the absence of a sufficient budget for them. That meant some exhausted teachers had to stay at school for more than 12 hours, waiting with students in the evenings for their parents to pick them up.

“When I started to note these challenges, I figured, ‘Okay, this is what I got into education for.’ I wanted to see what the implementation looked like,” Carroll says. “It looked one way on paper, but when you’re on the ground and talking to people, you see that there are still problems with equity throughout the education system.”

With the bigger picture still on his mind, he decided to apply to American University’s School of Education to help prepare him to meet his long-term goals. After all, getting on-the-ground experience didn’t mean he had to lose track of the overarching policy he’d need to know inside and out one day.

“I wanted to go to an institution that would give me the best resources,” he says. “With the great work American’s education department is doing, and the amazing faculty it has, I just knew this would best suit me.”

After finishing his degree, Carroll hopes to work up to a position of dean of students one day and, from there, become a skilled principal who advocates for his school and its budget. He imagines for himself an eventual role on the Board of Education and then the title of US congressman. Through it all, he says, he will push for equity initiatives, reforms to curricula to ensure all students have access to top-notch resources, and an emphasis on science and engineering without losing sight of the arts.

“I believe that American society takes public education for granted,” Carroll says. “If I’m fortunate enough to become a US congressman, my goal would be to make sure we fight for quality education on behalf of all students and all educators.”

Carroll left his middle school classroom after being offered a job at a high school teaching law, education, and public service, where he relishes the regular opportunity to mentor students. Now, in his second year as a high school teacher, he says he’s beginning to really find his footing as an educator. He’s learning the ropes—both as a student at American and as a high school teacher—and can’t wait for his chance to live out his answer to Rep. Hastings’ life-changing question.