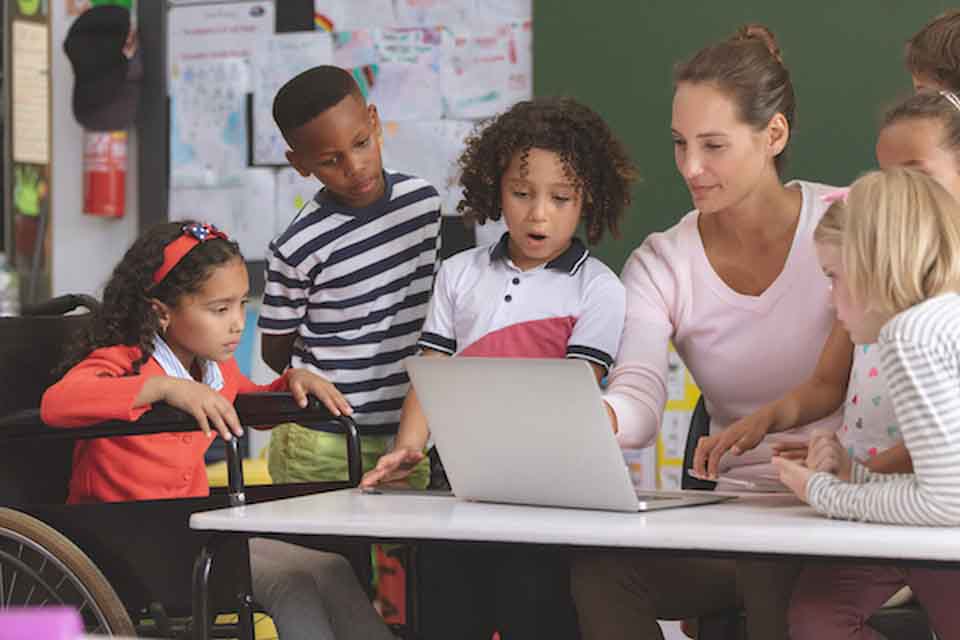 Jennifer Ecklund knew upon graduating with her undergraduate degree that she wanted to dedicate her career to ensuring equal access to a high-quality education to all students. She spent four years as a teacher in low-performing schools, an experience that taught her something significant: she yearned for a leadership role in education that would allow her to both guide schools and help shape education policies on a broader scale. . “I wanted more of a central office role where I could make an impact in more than just a couple of classrooms or on one campus—but in multiple classrooms and in multiple schools,” Ecklund says.

Ecklund initially recognized the opportunity to make a broader impact in education while studying communications at the University of Texas at Arlington. She had signed on as a volunteer to help a local nonprofit with after-school programming and housing projects. The low-income housing network in which she served was just 30 minutes from her middle-class hometown, but the disparity was palpable. “I realized that those kids I was working with were having a completely different educational experience from the one I had,” she says. “That really opened my eyes.” Many of the students’ parents worked minimum-wage jobs and lacked a formal education. They expressed a desire for their children to improve their educational prospects but didn’t know how to advocate for them. Ecklund resolved to find a way to support them as they worked to become the advocates they wanted to be for their children. She determined she would do everything in her power to help combat the educational inequities she was witnessing. “I became passionate about working in schools with students in difficult situations who needed extra support,” she explains.

After college, Ecklund was granted admission to Teach For America (TFA). As a corps member, she taught full time at two low-income, low-performing schools in the Dallas-Fort Worth area. Her classroom was filled with diverse learners facing a variety of challenges. TFA had forewarned her about the achievement gaps, but they didn’t become real until she stepped into the classroom. “I realized that some children sitting in front of me really didn’t know how to read,,” she explains. “I really realized what the teaching gap looked like.”

TFA also exposed Ecklund to strategic leadership and career opportunities she decided she wanted to pursue eventually, such as starting her own charter school. But she is quick to point out her admiration for teachers. “I think teaching is the most important job in the entire world. There is no greater thing,” she says. “But I wanted to see how I could make a systemic change. I wanted to have a bigger sphere of influence over the system at large.”

After fulfilling her two-year commitment to TFA, she taught for another two years before accepting a role as a district intervention coordinator in Texas. She oversaw the response to academic and behavior intervention and the Section 504 program for students in pre-K through 12th grade. Ecklund enjoyed the new leadership opportunity but desired more training to pinpoint the information she needed to set herself apart professionally.

She began researching graduate programs in education that placed an emphasis on policy and procedure. She sought one that would equip her with the tools and skills she needed to combat educational inequities in a broader, more impactful way. She also wanted the convenience of learning online so she could continue to work. Ecklund found a limited number of programs that fit her criteria but heard great things about American University’s Online Master of Education in Education Policy and Leadership. Upon inquiring further, she liked what she learned, especially that some of AU’s MEd professors worked for the Department of Education and had current, relevant experience. She also liked that several professors were part of the lobbying arm for the Every Student Succeeds Act (ESSA), which she wanted to learn more about.

Once she enrolled, Ecklund knew she had made the right choice. “I felt like every time I was in class, I was learning information I could directly apply to my work,” she says. For example, while working on a teacher evaluation system at her job, she was learning about teacher accountability on a much larger level through her program at American—knowledge she applied at work. In her current role as a data and accountability coordinator at a school in Louisiana, Ecklund has been able to take the information from her coursework and apply it to a different job role. At AU, Ecklund developed a deeper understanding of funding and program implementation, which helped inform the policies and plans she collaborated on in her new role. “Through the program I was able to learn about policies with a broader lens, so I understood the roles the state and local education agencies were supposed to play” she says.

Ecklund completed American University’s online master’s in education policy and leadership program in May 2019 and now feels equipped to actualize her goal of combating educational inequities. “Every kid in our country should have an equitable education experience regardless of race, economic background, or geographic location,” she emphasizes. “ I want to play a role in ensuring that that happens, and I feel like the program at American has enabled me to do that”.